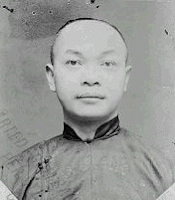 The Chinese Exclusion Act of 1882, as we have seen, affected Chinese Immigrants from coming into the United States for decades. Ironically enough however, the fourteenth amendment is supposed to keep Asian-Americans safe from losing their rightful chance from becoming naturalized citizens. Wong Kim Ark, paralleling the tragic Queen Liliuokalani, revealed the lack of correlation between what is law and the discriminatory actions taken against Asian-Americans at the turn of the 20th century. Wong Kim Ark was born in San Fransisco to Chinese immigrants--although his parents would never have the chance to become U.S. citizens, he was awarded citizenship simply by birth. As a young man, he left California for China on what was supposed to be a temporary trip. However at his return in 1895, Ark was detained by customs, despite having been born and raised in San Fransisco, claiming his Chinese ancestry made him Chinese national and not in fact American.

Wong Kim Ark's dilemma got taken all the way to Supreme Court, where the main question being was: can "an American-born person of Chinese ancestry could constitutionally be denied U.S. citizenship and excluded from the country"? In a groundbreaking 6-2 decision by the court, they upheld the notion that despite his parents indeed being Chinese immigrants and therefore never having the opportunity to become naturalized citizens due to the terms of the Chinese Exclusion Act, Ark's allegiance and citizenship to the United States could not be questioned. Although there were opposing views on the case, it was determined that by emphasizing on a citizen's ancestry as opposed to their birthplace was not constitutional.

Ark's case would be used as a reference for several future cases concerning citizenship issues. His case broke grounds on an issue that would still plague Asian-Americans for years to come. Ark's ability to defend himself and assert himself as indeed an American truly broke the stereotype of the "yellow peril" during that time. Asians were feared to take jobs of hard-working Americans; in this case, Ark was that hard-working American, getting his rights taking away simply because of his ethnicity. His case shed light on the hypocrisy of the American government, and although it would takes decade for such an equality to develop, it nevertheless shed a much needed light on the true peril of Asian-Americans in the country during that time.
Posted by Aida Solomon