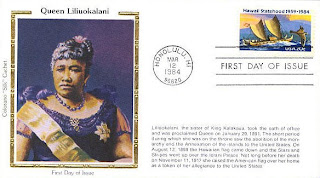 Queen Liliuokalani, born in 1838, is the epitome of girl power as the last and only reigning Queen Monarch of Hawaii. Raised under the royal family, Liliuokalani was well-educated and spoke fluent English. Native Hawaiians, like most indigenous people, were marketed to the American people as less than capable, required the aid of a more civilized nation like the U.S. to show them the error of their ways. Furthermore, Asian-American women in the United States were being broadcast in newspapers and films as either wild seductresses or meek wives. Liliuokalani, with her education and efficiency as a leader, shattered such steoretypes during her reign as a force to be reckoned with.

After her brother David Kalakaua successfully won the majority vote and become king of Hawaii, Likiukalani won the position of heir-apparent after the death of her younger brother. Officially now a Crown princess, Liliuokalani set out to Europe to the Queen of England's Golden Jubilee. It is there that Liliuokalani garnered information on the Bayonet Constitution that her brother was forced to sign, essentially stripped the royal family of most of their power. This was only the beginning of the tragic demise of the Hawaiian monarchy. The constitution drafted in 1887 was the beginning of the annexation of the Hawaiian nation to the United States.

Kalakaua's death in 1891 meant that Liliuokalani would become the Queen of Hawaii, which was under a power struggle between the native Hawaiians trying to sustain their government and the forceful hands of the United States. Although Liliuokalani valiantly tried to listen to the pleas of her people by instating a new draft of the constiution, American and European businessmen working in Hawaii felt threatened by her actions and devised a plan to overthrow the queen. On January 16, 1893, 162 sailors and marines from the USS Boston landed ashore in Hawaii as scare tactic to the monarchy. The next day, the queen had no choice but to succumb to their demands, actions that President Grover Cleavland deemed illegal. However, Cleavland conditioned the queen to renounce the evil actions of her capturers, a request that was speculated to take too long for the U.S.'s government's comfort. Her hesitation was enough for Cleavland to backtrack on his words and declared Sanford B. Dole (one of the business savvy men who partook in the original coup of the monarch) as president of the Republic of Hawaii. Liliuokalani was on house-arrest for eight-months before she was given her civil rights in 1896. Although Liliuokalani would travel to the United States and still fight for her nation, she was not successful. However her bravery and spirit would be recorded in Asian-American newspapers during her time, inspiring the thousands of discriminated immigrants in the United States.
Posted by Aida Solomon