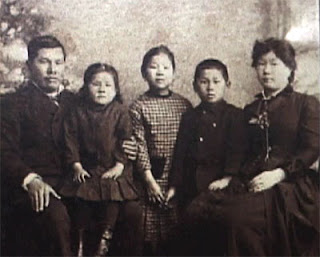 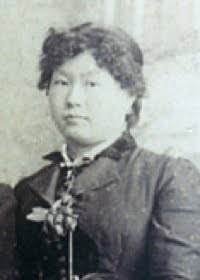 Mary Tape was definitely not your average stay-at home mom and broke the stereotype of the submissive, complacent Asia-American Lotus Blossom. After being orphaned in Shangahi and brought to the States by Missionaries, Tape settled in San Fransisco, becoming an accomplished photographer and painter. After marriage and the birth of four children, Tape made what was an expected decision as a mother and member of our society--she enrolled her eight-year-old daughter in public school. It was 1884, not the most progressive time in history for Asian-Americans or any other race that wasn't Anglo-Saxon for that matter; however, the educated and Westernized Tape was still infuriated when Mamie Tape was denied admission into Spring Valley School by the principal, Jenny Hurley. Although this was unfortunately a common occurrence during that time period, it was uncommon for a woman such as Tape to take such aggressive action against the school, filing a lawsuit in a groundbreaking case Tape V. Hurley. Tape's words and demands are logical, as shown in this letter written to the San Fransisco board of education.

Marty Tape took principle Jenny Hurley to the California Supreme Court, suing the board of education and deeming their behavior as violation to "California Political code". In 1885 in a ground-breaking decision, Justice McGuire sided with Mary Tape, stating “To deny a child, born of Chinese parents in this state, entrance to the public schools would be a violation of the law of the state and the Constitution of the United States.” This was a dark and discriminatory era in our history where legislation such as the Chinese Exclusion Act was prohibiting Chinese workers from immigrating into the country for 10+ years. Tape decision may have been upheld in court, but the Spring Valley School and the San Fransisco Board of Education nonetheless took matter into their own hands. By creating a code separating "Mongol" children from attending their public schools, the board of education formed Oriental public schools for children like Tape's to attend to. This decision is an eerie premonition of the Jim Crow segregation laws of the South that would be enacted a century later. Asian-Americans were not looked at as equals to Anglo-Americans, with the media broadcasting a "Yellow Peril" coming from the far East and taking much need occupations for white men. Ironically enough, Chinese woman like Tape were demeaned in newspapers as prostitutes in San Fransisco's Chinatown or submissive housewives. This mindset was obviously shared by the San Fransisco's Board of Education by establishing such segregation.

Unfortunately, Tape's daughter never got the chance to attend Spring Valley, the administration claiming her "vaccinations were expired". Despite the lack of correspondence of the decision by the judge and the actions taken by the board, Tape's brave and mother instincts has left an impression in our history and forever impacted Asian-Americans.
Posted by Aida Solomon